Day 1: Tabriz          Arrival to Tabriz by Turkish Airline/Ata Airline. Meet and greet, transfer to hotel. After getting some rest, our tour starts from the spectacular Grand Bazaar of Tabriz; it is the largest covered bazaar in the World (UNESCO Site). Then, we would visit the oldest church of Tabriz named Saint Mary Church was built in the 6th century which Marco polo referred to this church on his way to China. Then we will visit some of the existing historical monuments including the Blue Mosque, Azerbaijan Museum. O/N Tabriz

Day 2: Kandovan/Jolfa          We’ll drive toward Volcanic Kandovan Village. This village exemplifies man-made cliff dwellings which are still inhabited. See the inside of a cave house, watch the locals' life, visit the organic market and have a cup of tea in this peaceful village. Then we would drive to Jolfa to see St. Stephanus church (UNESCO Site), a beautiful Armenian church in a valley near the river Aras. Its oldest parts date back to the 14th century with the main building having been rebuilt in the late 16th. Then we could discover the Shepherd Chapel and Khajeh Nazar caravanserai.  O/N Jolfa

Day 3: Maku/Urmia          After breakfast we will drive to Maku. En route, we would visit the chapel of DzorDzor which is one of the UNESCO registered Armenian Monastery. The monastery had its heyday in the fourteenth century before being abandoned. Then we would discover Saint Thaddeus Monastery (UNESCO Site) which is the most important Church for Armenian people in Iran. Qara Kelisa, also known as the St. Thaddeus Church, is one of the oldest and most notable surviving Christian monuments of Iran that carries great significance for the country's Armenian Orthodox community. We would drive toward Urmia. O/N Urmia

Day 4: Tabriz/Tehran          After breakfast we would discover Saint Mary Church in Urmia. It is considered by some historians to be the second oldest church in Christendom after the Church of the Nativity in Bethlehem in the West Bank. We will drive toward Tabriz to have flight toward Tehran, the capital. En route, we would discover the Urmia Salt Lake. Transfer to hotel.  O/N Tehran

Day 5: Tehran          After breakfast we will visit Holy Mother of God (Saint Mary) Church, Armenian Museum, and UNESCO Site of Golestan Palace, National Museum which is the most important museum of Iran. In the evening we would walk on the famous Nature Bridge. O/N Tehran

Day 6: Tehran/Isfahan           Drive toward Isfahan. En route, explore Kashan and its tourism sites including Fin Garden (UNESCO SITE), Borujerdiha House. Keep on driving to Isfahan and transfer to hotel. After a short rest we would have city tour by visiting the second biggest square of the world, Naghshe Jahan Square (UNESCO site) and its beside sites; Royal Mosque (UNESCO Site), Lotfullah mosque, and Ali Qapu Palace. O/N Isfahan

Day 7: Isfahan          After breakfast we will drive to Jolfa district and visit the most beautiful church in Iran, Vank Cathedral(the cathedral was established in 1606, dedicated to the hundreds of thousands of Armenian deportees that were resettled by Shah Abbas), Bethlehem Church, Music Museum. In the evening explore Chehel Sotun Palace and Jameh Mosque. O/N Isfahan

Day 8: Isfahan/Shiraz          After breakfast we would drive toward Shiraz, which it would take about 5 hours. En route, we explore Pasargadae (UNESCO Site). It was the capital of the Achaemenid Empire under Cyrus the Great who had issued its construction (559–530 BC); it was also the location of his tomb. Then we will drive to Persepolis(UNESCO Site). It was the ceremonial capital of the Achaemenid Empire (ca. 550–330 BC). Archaeological evidence shows that the earliest remains of Persepolis date back to 515 BC. Then we would explore Naghshe Rostam (Necropolis). Drive to Shiraz and transfer to hotel.

Day 8: Shiraz          We would visit Zand Complex (Citadel – Bathhouse – Bazaar – Mosque). If we have enough time, we would visit Eram Garden too. At night, drive to the airport and have a flight to home. 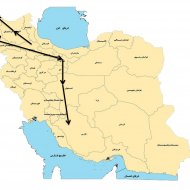 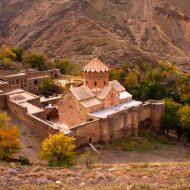