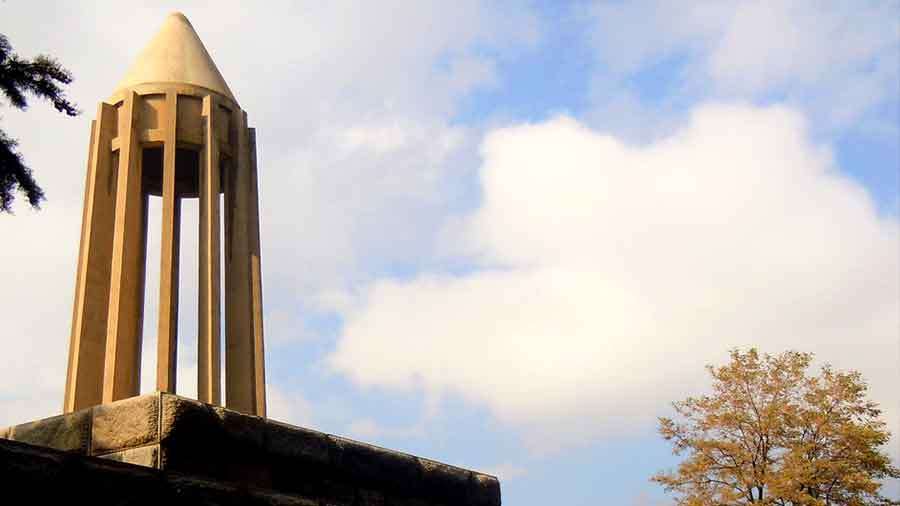 Radiating with six straight avenues from a central square (Imam Khomeini), Hamadan is one of the oldest continually inhabited towns, centers of civilization, and numerous capitals of different dynasties that have ruled Iran through the ages. Capital of the province of Hamadan, at the foot of Mount Alvand, and located at an altitude of 1,829 m above sea level, it is 400 km to the southwest of Tehran by road via Qazvin, and can be reached by air as well. It is a trade center for a fertile farm region where fruit and grain are grown.

In the modern Hamadan which is built on the plans prepared by the German architect Karl Fritsch, nothing is left to be seen of ancient Ecbatana or the Medes capital before they formed a union with the Persians. Hamadans climate is mild and delightful in summers, and cold in winters. Early spring and late autumn are the rainy seasons for the region. To this day Hamadan is a very popular retreat with Iranians during the warmer months when the climate in autumn and spring is one of the most pleasant in the country, but winters are long and sever.

Hegmataneh Ensemble:  (Prospective World Heritage Site), the ruins of ancient Hagmataneh, on the site of which the present Hamadan stands, date from the period of Median monarchs (7th and early 6th centuries BC) who had made the city their capital with remains of ancient palaces and great temples.

Ganjnameh: Hamadans oldest Achaemenian rock carvings consisting of two huge inscribed panels (twenty lines) carved on two rock faces of some two meters in height are located 5 km west of the city on the slopes of Mount Alvand. The site is known as Ganj Nameh (Treasure Book, or Treasure Inventory), because for a long time it was believed that the lengthy cuneiform inscriptions contained a clue to the whereabouts of the fabulous treasures accumulated by the Medes and Achaemenians. Almost at eye-level, they are reached via a bridge over a river lined with tea-houses.

Tomb of Esther and Mordecai:  It is considered as the most important Jewish pilgrimage site in Iran, and used to be visited by Jewish pilgrims from all over the world. Inside the brick dome and upon the plaster work of the walls there are some Hebrew inscriptions. The experts now say Esther was in fact buried in Susa, and this tomb probably belongs to another Jewish Queen, the wife of Sassanian king Yazdgird I (339-420 AD), Shushan Dokht. There has been a Jewish colony at Hamadan according to Herfeld since the latter’s time. The simple brick building, constructed in the 13th century on the site of an earlier (probably a 5th-century tomb), is entered through a rough stone door, which swings open into a large assembly room, a vestibule, an elevation, and a Shah Neshin.

Tomb of IbnSina: The world-famous Iranian scientist, philosopher, and physician Abu Ali Sina known to the West of Avicenna, a prodigy who knew Koran by heart, lived in Hamadan for several years. A large mausoleum built over his tomb in 1952, together with a library (which contains approximately 8,000 volumes of books) and a small museum devoted to his works are visited by most local and foreign tourists. A magnificent view of the city and the Mount Alvand can be seen from the roof of this museum. Avicenna was above all a mathematician whose theories were taught in Europe until the 19th century.

Mausoleum of Baba Taher: The 20th century Mausoleum of Baba Taher (another modernist atrocity), situated near the northern entrance of the city from Tehran Highway and at the end of Baba Taher Street in a square named after him, is a rocket-like monument to a mystic poet contemporary of Avicenna, Baba Taher, who died in 1019 AD. The mausoleum was reconstructed in 1970. Baba Taher, living in the first half of the 11th century AD.. At least more interesting than the monument are the magnificent flowers and winding paths that surround it at the center of a rather large hilltop square.

Alisadr Water Cave: Alisadr the wonderfully beautiful Cave among the low hills of Kabudar Ahang 75 km to the north-west of Hamadan near a village by this same name and in the heights of Sari Qayah is one of the strangest natural sights and probably the only water cave in Iran. In fact, it is an endless network of caves full of clear water. Historically, the Alisadr Cave and two other nearby caves were used by Safavid army as secure refugees.
Alisadr Cave was discovered in the first half of 70s by a group of mountaineers from Hamadan, and waves of local and foreign tourists flooded to visit the site since 1975. The width of the cave varies between 1.5 and 60 meters. In some sections the caves ceiling, more than 15 meters high, is covered with most beautiful cabbage-like stalactites hanging downward.

Read 3734 times Last modified on Wednesday, 03 February 2016 08:39
Published in Places To Go
Tagged under
More in this category: « Mashhad