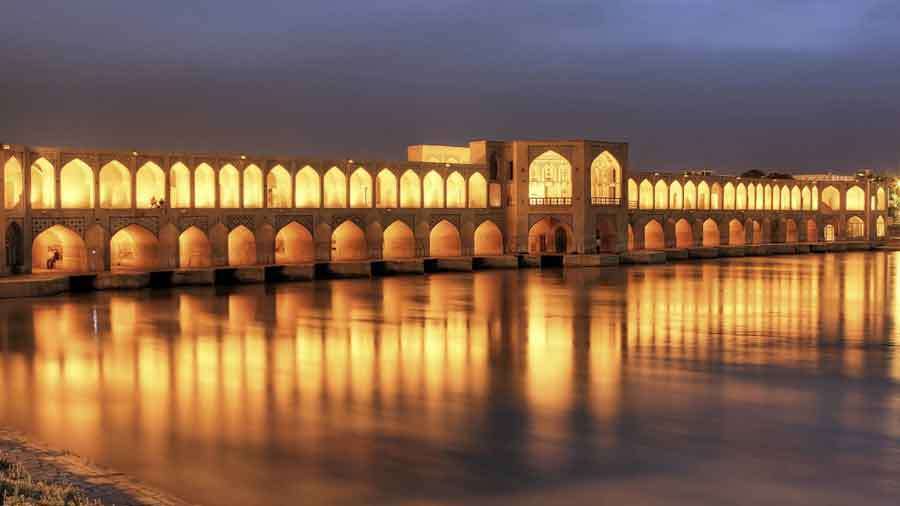 Overview
Isfahan was considered by western travelers of the 17th and 18th century to be one of the most beautiful cities in Iran. Isfahan is Iran’s third largest city after Tehran and Mashhad. It flourished from 1050 to 1722, particularly in the 16th century under the Safavid dynasty, when it became the capital of Persia for the second time in its history. Even today, the city retains much of its past glory. It is famous for its Islamic architecture, with many beautiful boulevards, covered bridges, palaces, mosques, and minarets. This led to the Persian proverb “Esfahān nesf-e jahān ast” (Isfahan is half of the world)

Isfahan was at its peak was under the Safavid dynasty, when it reached its golden age. The careful planning of the layout of the city still makes it easy and pleasant to visit today. A large river divides the city, and the inhabitants under the Safavids, encouraged by their ruler’s love of the city, undertook the building of mosques, palaces, gardens, and bridges, thus giving Isfahan its feast of monuments.

The Friday mosque (1088): Originally a Zoroastrian fire-temple, the Friday mosque has undergone extensive reconstructions over the centuries and is now a magnificent brick structure. Its Mihrab, or alter piece, its ornate stucco, its columns and lawns, or arches, its courtyards surrounded by hidden cloisters, are among the masterpieces of Persian art and are precursors of Islamic architecture.

The Imam Mosque (1088): formally known as the “Shah Mosque” with its beautiful structure, tiles, ornate portals and floral geometrical decorations, dominated by a typically Persian blue color, has the reputation among many as one of the jewels of Islamic architecture.

Sheikh Lutfollah Mosque: According to Islamic art experts, this mosque is a masterpiece, owing mainly to its rare colors and unusual dome. Unlike most mosques, it has no minarets which suggest it may have been a private place of worship for the royal family only.

The Palaces:
Chehel Soutoun Palace (Palace of 40 columns): Although the name of the palace means “forty columns” there are in reality only twenty, a reflecting pool giving the impression that there are another twenty. This marvelous pavilion was built as reception hall for Shah Abbas in 1647.

The Ali Qapu Palace: Among the interesting aspects of the palace is its ingenious system of acoustics which was very innovative at the time. On the sixth and highest floor, hidden by the elevated portal which makes access difficult, are the beautiful artworks, chiseled out in the shape of vases and musical instruments. The other walls and the staircases are painted with Persian miniatures or decorated with stuccoes, designs reminiscent of traditional Persian rugs and paintings.

The Great Central Square: This Square, known earlier as the Royal Square was built in 1612. The Imam or royal Square is flanked by monuments: the Ali Qapu palace, Imam and Sheikh Lotfollah mosque and the Bazaar. This square gives the impression of the illustration of half of the World.

The Bridges:
Several bridges were built on the great Zayandeh River, the oldest of which dates back to the Sasanide period.
The Bridge of 33 arches, built under order of Shah Abbas 1, the Khadju Bridge, and Shahrestan Bridges are the most popular bridges in Isfahan.

The other face of Isfahan:
The city of Isfahan has always had a reputation for being tolerant and there is a considerable minority of both Jewish and Armenians who live there. These minorities exist in harmony with the other communities and are free to practice their businesses or are involved in handicrafts. The Christians, persecuted and chased away by the Turks were welcomed by Shah Abbas 1 who guaranteed them the freedom to practice their religion, in return for their contribution to the prosperity of the city. They came in large numbers and began the construction of houses, churches, roads, and bridges. The most significant of their churches is the Cathedral built between 1606 and 1664, Saint Sauveur “Vank”. It is the historical focal-point of the Armenian community in Iran. The interior is richly decorated in a mixture of styles including Christian European biblical scenes.

Read 4677 times Last modified on Wednesday, 03 February 2016 06:35
Published in Places To Go
Tagged under
More in this category: « shiraz Kermanshah »