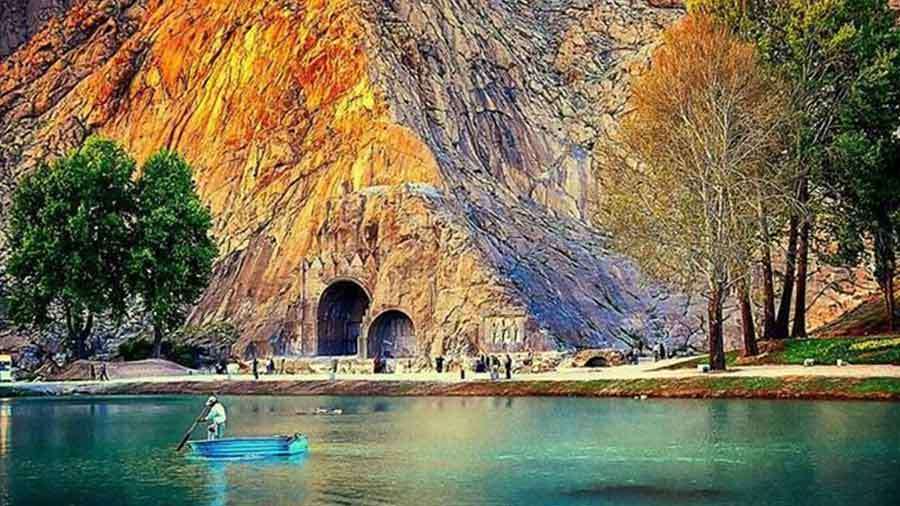 The capital of the province of Kermanshah is mainly populated by Kurds and is a major cultural and commercial center in Western Iran. These Kurds still speak their own language among themselves and remain faithful to their testamentary traditions: the men wear large turbans on their heads and black dungarees tight at the waist and at the ankles. The women wear trousers and bright-colored scarves and sometimes brocade bodices, but they are mostly changing into urban type of dress, particularly in towns.

Modern Kermanshah is an important agricultural and a burgeoning industrial center. In the surrounding country fruit of many kinds is grown; another local product is sugar-beet. Carpet-weaving and manufacture of givehs (canvas covered shoes like the Spanish alpargata in appearance) have long been carried on in the town. Since the construction of an oil refinery on the banks of Qara Su River in 1935, motor spirit and other petroleum products have been processed there for consumption in northern and north-western Iran.

Tagh-e Bostan: (Prospective World Heritage Site), the Sassanid splendor contained in two magnificent grottos of fine Persian sculpture depicting royal hunting scenes, true narrative murals in stone and almost pictographic in detail. The first one you come to is a majestic bas-relief depicting the investiture of Artaxerxes II, at the same time celebrating a victory over the Romans, by the deity Ahura Mazda to the right and Mithras, holding symbolic sacred bunch of twigs, to the left. The next is a small arched recess carved out of the cliff in the 4th century AD, showing Shapur II and his grandson (later Shapur III), created by the latter as a testament to his own dynastic credentials. The third is a larger grotto, with a lower panel depicting an armored figure holding a lance and seated on a now headless horse, and an upper panel showing a royal investiture.

Bisotun:  (World Heritage Site) The Bisotun mountain stands some 30 km to the northeast of Kermanshah via the main road to Hamadan, which itself follows the ancient caravan route along the bottom of a fine velvety fawn-colored cliff. Long before Achaemenians, even prehistoric man inhabited Bisotun according to Carleton Coon, who found while excavating a cave there in 1949 evidence of a highly developed industry datable to the Middle Paleolithic, indicating that Bisotun was inhabited during the Wurm glaciation. The Bisotun sculptures (measuring 5.48 by 3.04 m) are of the highest historic importance and have been created in 480 BC, the sixth year of Darius reign. It would take the best part of a day to explore everything, although most visitors are happy merely to see these famous relieves. Because of the lighting conditions, it is better to visit the site in the early morning and then move on to Taq-e Bostan.

There are plenty of remains at this site. Within easy reach of the cliff there are a Median citadel, the walls of a Parthian settlement, a stone block carved with three Parthian figures, the foundations of a Sassanian bridge, and a grotto with evidence of occupation in Neanderthal times.

Temple of Anahita at Kangavar:  (Prospective World Heritage Site) this is one of the architectural monuments of ancient Iran, with its history going back to the Parthian period (200 BC), recently unearthed at Kangavar, 90 km to the east of Kermanshah. The worship of Anahita goddess of abundance and guardian of water in ancient Iran, and goddess of beauty and fecundity in some other countries was broadly practiced during the Parthian period. However, nothing is said of her existence in numerous Achaemenian inscriptions. The cult of the goddess and the building of temples to her, continued during the Sassanian period. Despite historical references to the temple, its location and architectural decorations by few Muslim and Greek geographers and historians, the greatest bulk of material evidence on the history of the temple and the cult has been gathered as a result of excavations carried out at the temple site on an outcropping rock.

Read 4591 times Last modified on Wednesday, 03 February 2016 06:51
Published in Places To Go
Tagged under
More in this category: « Isfahan kerman »