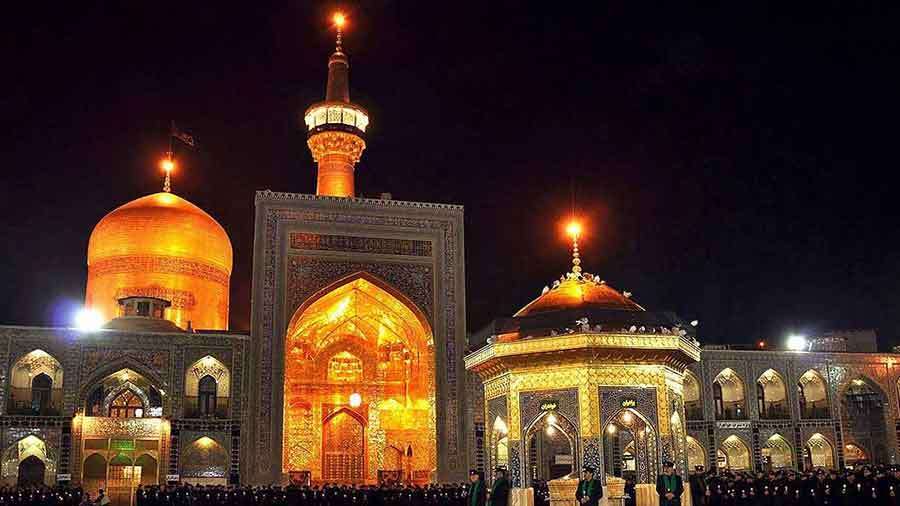 Arriving by plane the first view of the city is that of a very green and well-laid regular rows of trees. Once on the ground, the traveler is fascinated by the golden cupolas and minarets. It is interesting to know that the word of Mashhad – or more correctly Mashhad e Moqaddas (Mashhad the Holy) – literally means place of martyrdom (or place of burial of a martyr).

Nowaday, apart from being the holiest city of Shi’ite Iran, Mashhad can boast of hundreds of thousands of pilgrims from all over the world, including Yemenis, Iraqis, Indians, etc.

Shrine of Imam Reza in Mashhad: Mashhad grew around the legendary martyrdom of Imam Reza, and the city’s history is inextricably linked with that of his Shrine. According to popular belief, Imam Reza, heir to the Abbasid Caliphate as well as eighth of the Shiite Imams, died in what was then the village of Sanabad in 817 AD after eating some grapes. The story spread that he had been poisoned on the orders of the Caliph Ma’mum after having in some way arousing his enmity. What had been a small village grew around the Shrine into small town, later known as Mashhad, but for many centuries its development was slow and until much later it remained a pilgrimage center of only regional importance.

Gowharshad Mosque: Grand Mosque of Gowharshad with its 50-meter high faience dome and cavernous golden portal, is located immediately to the south of the Holy Shrine of Imam Reza square and is architecturally perhaps even more important than the mausoleum. It covers an area of 9419 square meters, and has two beautiful minarets each 40 meters high. An inscription can be seen on the margin of the ivan portal, which was partially made upon the orders of well-known Timurid prince called Baysonqor Mirza. Behind the ivan can be see the Shrine’s golden dome and the two superb minarets.

Bazaars of Mashhad: Mashhad has three bazaars. The biggest, the two storied Bazaar-e Reza (or Bazaar-e Bozorg), one of the main shopping centers in the town. The crafts of Khorassan are all represented in the bazaar. All kinds of local souvenirs such as fur-cloak, turquoise, Carnelian ring, gold, perfume, saffron, pelisse, prayer-mat, and rosary may be found here besides a myriad of foreign articles. Bazaar has two gates: one in Bayt ol-Moqaddas Square and the other in the 17th Shahrivar Square. The remains of several old caravansaries, now put to other purposes, can be seen.

The Nader Shah Mausoleum: The Nader Shah Mausoleum is a curious piece of architecture completed in 1959, consisting in a heavy slab of concrete which forms a crypt and of a colossal bronze group representing soldiers led to battle by a sort of an equestrian commander on horseback bearing a turban and a large ax (Nader Shah). Designed by the late Iranian sculptor Abolhassan Sadiqi (1897-1995, a follower of the Master Painter Kamal ol-Molk) and built in Italy by an Italian sculptor named Bruni, the composition does not lack movement. The crypt shelters the tomb of Nader Shah. A small museum and a library have been set up nearby: Nader Shah souvenirs, mainly 18th and 19th century weapons, helmets and armor (altogether 130 pieces, from Afshar period), and prehistoric bronze objects unearthed during excavations in the region.

Ferdowsi Tomb near Mashhad: Hakim Abolghasem Ferdowsi, is the greatest Iranian epic composer who composed Shahnameh during 30 years of his life time. The tomb of his great and famous poet is located 24 kilometers northwest of Mashhad (Tous) on Mashhad- Grouching road. Ferdowsi’s tomb is placed in an inspirational garden. Beautiful stone portraits inside the tomb’s arena depict stories and epical achievements of Shahnameh. Restoration of the tomb was done in the year 1968.

Harounieh Vault: The only remaining architectural brickwork belonging to the old Tous is known as Harounie Vault which was repaired and restored by the committee of National works and Cultural Heritage of Khorasan. People call it Harounih jail and in itineraries texts it has been referred to as Tous mosque and the prayer place Ghazzali.

Read 9506 times Last modified on Wednesday, 03 February 2016 08:52
Published in Places To Go
Tagged under
More in this category: « kerman hamedan »