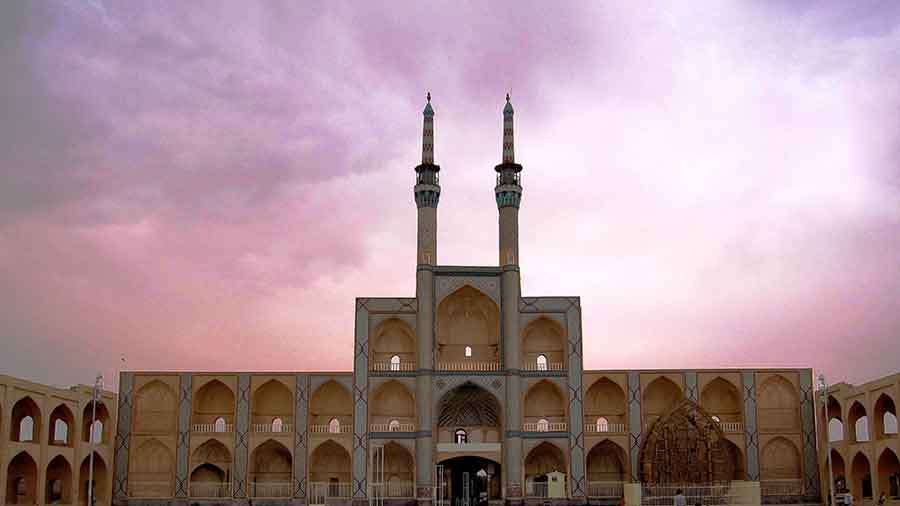 This “desert Town” used to be an oasis-like stopover for camel caravans. Vast irrigation schemes, which draw water from underground springs and the surrounding mountains, have made Yazd into a green and fertile town. The town is famous for its traditional clay architecture and brick wind towers, which use the breezes to provide a kind of air-conditioning system for the houses. The region also offers a number of interesting sites: the mosques from the Islamic period and the Zoroastrian monuments, many of which are still used today, most notably the “fire temples” and the “towers of silence”. Every year, Yazd attracts thousands of visitors for various religious festivals besides the Iranian New Year (Now –Ruz, March, 21st). One of the most important Zoroastrian fire temples on a hill about 52 km outside Yazd attracts thousands of pilgrims in the month of June.

City Walls: The twelfth to fourteenth century walls of Yazd, which are still standing, are perhaps the most interesting, imposing and skillfully planned. In Yazd, sections of the old walls and moat remain, providing an interesting example of a medieval wall, fortified by moat, towers and barbicans, now buried deep within a town which has long since expanded beyond its old limits.

Bazaar: The most important bazaars here are: Bazaar-e Khan; Goldsmiths Bazaar; and Panjeh Ali Bazaar. The many bazaars here are probably the best places in Iran to buy silk fabric, cashmere, brocades and cloth (taffeta and Yazdi shawl) all the beautiful local designs, motifs, and colors, the products which brought the town its prosperity.

Amir Chakhmaq Mosque: On no account should you miss the fourteenth-century AD Masjid-e Amir Chakhmaq, famous for its superb portal ornamented with stucco, and the traditional four-ivan structure on a courtyard a little too small for the ivans. A marble mihrab has been installed, around which decorative tiles and verses of the Holy Koran have been etched over stone.

Jame Mosque: There is no more impressive gateway in Iran than this great soaring 14th century edifice. Crowned by a pair of minarets, the highest in Iran, the portals facade is decorated from top to bottom in dazzling tile work, predominantly blue in color. Inside there is a long arcaded court where, behind a deep-set southeast ivan, is a sanctuary chamber which, under a squat tiled dome, is exquisitely decorated with faience mosaic: its tall faience mihrab, dated 1365, is one of the finest of its kind in existence.

Twelve Imams Shrine: Further from the center can be found the splendid early 12th century Shrine of the Twelve Imams (maghbareh-ye Davazdah Emam) properly described as a funerary mosque. It is almost next door to the Zendan-e Eskandar (Alexanders Prison, a deep, circular, brick-lined pit about 10 m in diameter) and has a fine three line Kuffic inscription inside, with the names of each of the Shiite Imams, none of whom is buried here. Although the mausoleum is small, dusty and forgotten, it is nonetheless a well-preserved building of the period.

Towers of Silence, Dakhmeh or Qaleh-ye Khamushan: These are three impressive buildings remaining from several other similar structures on hilltops outside and in the immediate vicinity of the town where the bodies of the dead Zoroastrians would be brought to the foot of the tower so that a ritual ceremony could be held in presence of the relatives and friends of the deceased. The body was then carried by the priests into the tower where it was laid on the flat stones on the ground thus avoiding that earth, water, and fire, the divine elements be contaminated, the soul of the defunct person having already been by Ahura Mazda. Nowadays, however, some of them have been opened to the public. Beneath the hill there are several other disused Zoroastrian buildings including a defunct well, two small bad-girs, a kitchen and a lavatory.

Chak Chak: This important Zoroastrian fire-temple is on a hill 52 km to the north-northeast of Yazd. It attracts thousands of pilgrims for an annual festival, which lasts for ten day from the beginning of the third month after Now Ruz. To visit, it is best to get the permission of the religious authorities at the Atashkadeh in Yazd.

Bagh-e Dowlat Historic Complex: This is a complex built according to the original Iranian architectural style and consists of a large garden and some buildings. Being watered by a qanat, until the very recent past it was used for the residence of the provincial governor. The most impressive part of the complex is a 33-meter high bad-gir (wind catcher) on the roof and a water stream in the interior.