Iran Wildlife
Wildlife of Iran Asiatic cheetah Wildlife of Iran includes its flora and fauna and their natural habitats. One of the most famous members of wildlife in Iran are the world’s last surviving, critically endangered Asiatic cheetah (Acinonyx jubatus venaticus) also known as the Iranian cheetah, which are today found nowhere else but in Iran. Iran had lost all its Asiatic lion and the now extinct Caspian tigers by the earlier part of the twentieth century. The Syrian elephants used to live in southern parts of the country but has gone extinct as well.

Iran’s wildlife is composed of several animal species including bears, gazelles, wild pigs, wolves, jackals, panthers, Eurasian lynx, and foxes. Other domestic animals include, sheep, goats, cattle, horses, water buffalo, donkeys, and camels. The pheasant, partridge, stork, eagles and falcon are also native to Iran.
The Persian leopard is said to be the largest of all the subspecies of leopards in the world. The main range of this species in Iran closely overlaps with that of bezoar ibex. Hence, it is found throughout Alborz and Zagros mountain ranges, as well as smaller ranges within the Iranian plateau. The leopard population is very sparse, due to loss of habitat, loss of natural prey, and population fragmentation. Apart from bezoar ibex, wild sheep, boar, deer (either Caspian red deer or roe deer), and domestic animals constitute leopards’ diet in Iran.

More than one-tenth of the country is forested. The most extensive growths are found on the mountain slopes rising from the Caspian Sea, with stands of oak, ash, elm, cypress, and other valuable trees. On the plateau proper, areas of scrub oak appear on the best-watered mountain slopes, and villagers cultivate orchards and grow the plane tree, poplar, willow, walnut, beech, maple, and mulberry. Wild plants and shrubs spring from the barren land in the spring and afford pasturage, but the summer sun burns them away. According to FAO reports, the major types of forests that exist in Iran and their respective areas are: 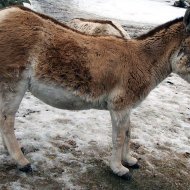 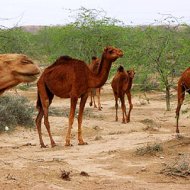